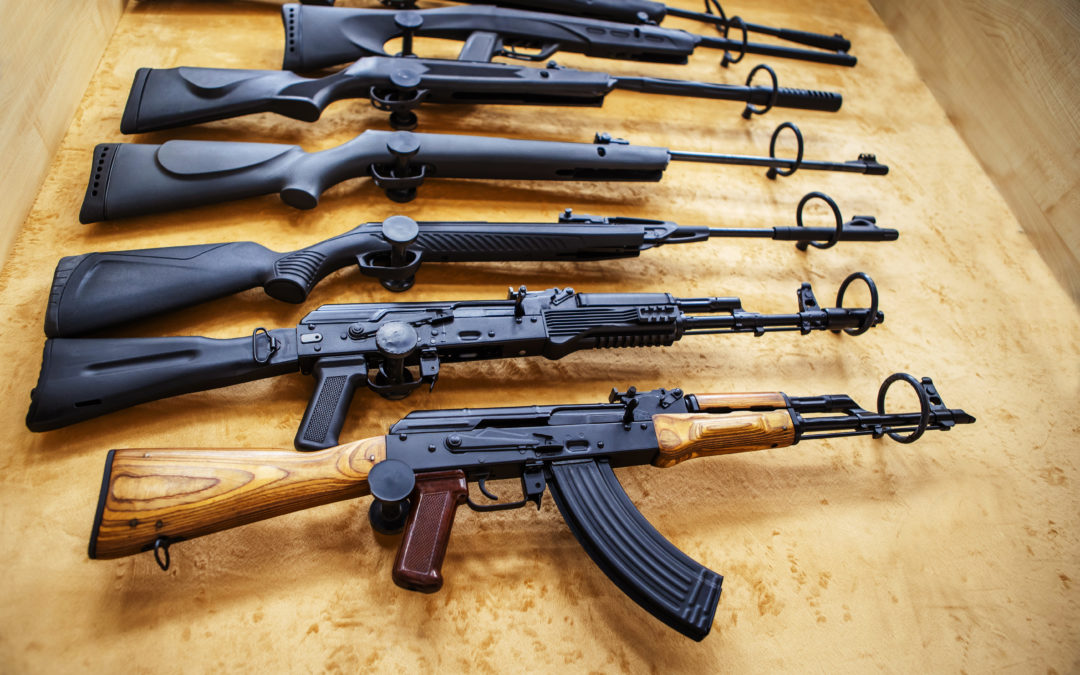 If you read our article on hunting rifles for beginners, it may have left you wondering what other sorts of rifle types are out there. After all, most everyone is familiar with the ubiquitous bolt-action and the classic lever-gun, but wouldn’t it be nice to have a complete list of rifle types? Read on for such a lineup, in alphabetical order.

Thanks to an accident of the alphabet, we start here with the familiar bolt gun. Utilizing an action actuated by a bolt and handle, the bolt action seats a round when the bolt is driven forward, after which pushing the bolt down locks the action into place. Once fired, the bolt is unlocked by lifting, then pulling the handle rearward to eject the spent shell. The process can be repeated until the magazine is empty. Bolt handles come in a variety of different throw angles (the distance which you must rotate the handle to unlock the bolt)—60- and 90-degrees are popular options. As a general rule of thumb, the shorter the throw angle, the quicker you can run the bolt, the quicker your follow up shot, hence why companies like Benelli use 60-degree throws on their premier hunting rifles (in Benelli’s case, the Lupo).

Standard bolt-actions come in a wide variety of subsets. Some utilize push-feed actions, which strip the cartridge off the top of the magazine to seat into the action. Others utilize controlled-round feed, which locks the round into a claw-style extractor as the bolt is pushed forward. As far as feeding is concerned, some feed from detachable box magazines, while others utilize fixed, hinged-floorplate variants, and still others can be single-shots. Safeties can be standard two-position or three-position variants (the latter has an option to lock the bolt in place), which can be mounted on the tang, the trigger guard, or even the bolt head. Some bolts cock when opened, others cock on close, etc. ad infinitum. Despite this multitude of minute differences, however, bolt-actions all run about the same way. Lift the bolt, pull it back, push it forward, lock it down, and you’re ready to go.

Does the above procedure seem a little too complicated to you? Want to shave off a few fractions of a second on your follow-up shot? If so, the straight-pull bolt-action is for you. Unlike its traditional sibling, the straight-pull locks and unlocks without manipulating the bolt handle up and down, but simply by sweeping it back and slamming it home.

This is accomplished in different ways by different companies. Savage’s new Impulse utilizes the Hexlock system, a series of six ball bearings which lock the bolt into place in a barrel extension when closed. Other systems, like the classic Blaser R8, utilize a radial locking system. There are even more out there, but the main characteristic, of course, is the operation of the action. Pull out, push in, and fire.

Break-action rifle types are among the simplest designs on the market, and tend to skew either to its high or low end. Many exquisite double-barreled dangerous-game rifles are of a break action design, as are many small rimfires. Break-actions are actuated by a lever either on or near the tang of the rifle, which hinges the barrel(s) forward to reveal the chamber(s). Cartridges are then placed into the chamber(s) manually, and the gun closed to seal the chamber and cock the gun. After firing, the action is broken back open, which either fully ejects or extracts the spent shells, based on the design.

Incredibly accurate and durable, falling blocks can be found in such famed firearms as the Sharps rifle (Quigley down under, anyone?), and the fine Ruger No. 1. Its design is as simple as it is effective. A block rides in tracks cut into the breech, and is actuated by a lever that generally doubles as a trigger guard. Dropping the lever opens the chamber, after which a cartridge can be fed in by hand. Lifting the lever raises the block, sealing the chamber tight–so tight, in fact, that this is the design often used in artillery, and other high-pressure weapon systems. To unload, the rifle is generally equipped with extractors rather than ejectors, necessitating the removal of spent shells by hand. Cocking the hammer is accomplished manually by pulling it back.

This is a hunting page, meaning you likely are not reading this article to get informed on full-autos. That said, it is technically a type of rifle, so I feel obligated to include it here, lest people forget about this pinnacle of firearm technology.

A fully automatic firearm is, essentially, a gun which allows the bolt to continue cycling and firing for as long as the trigger remains pulled, until your magazine runs out of ammunition (one technical exception to this is guns offering a “three-shot burst”). How it does this is barely different in principle to how a semi-automatic works, which I have written about in some detail down below. The only primary difference is between closed- and open-bolt fire.

A closed-bolt design will chamber and fire a round exactly like its semi-automatic sibling: the primer is struck by a firing pin, actuated by a hammer. The only difference is that a device (generally some sort of sear) will allow the hammer to release again as the bolt or bolt-carrier moves forward, firing the next round. An open-bolt full-auto, on the other hand, simply uses the force of the bolt driving forward to ignite the primer–the firing pin will thus often be attached directly to the bolt.

If you really need an explanation here, you may have not watched enough Westerns as a child. Lever-action rifle types are those stylish guns you often see hanging off horses in saddle bags, or in the hands of men with 10-gallon hats. They are operated via the lever riding below the receiver, and are widely favored for their quick-running actions, delivering fast and accurate follow-up shots. The downstroke of the lever ejects the spent shell in the chamber and cocks the hammer, while driving it back up chambers a fresh cartridge.

Magazines are almost always tubular, though some companies equip the guns with detachable- or fixed-box magazines, as these can help the rifle chamber more efficient styles of ammunition. For traditional tube-magazine-fed lever guns, some are fed through the top of the tube via a removable inner sleeve, while others utilize a side-gate loading mechanism. Some rifles even have both. Safeties are not traditionally affixed to these sorts of firearms, though some now come with the feature.

Let me start this section with a warning, to ensure no one runs afoul of local game seasons. All muzzleloaders that sport rifled barrels are rifles, but not all rifles are muzzleloaders. A muzzleloader is defined as a gun in which propellant (powder) and projectile are both loaded from the muzzle The powder is first measured and poured into the chamber, after which the bullet is driven home by a ramrod. Some more modern designs like the Traditions Nitrofire only load the projectile down the barrel and feed propellant from the breech, but as some states do not consider this a true muzzleloader, I will stick to the stricter definition.

Ignition is accomplished via either a #209 shotgun-style primer or a large-rifle primer for inline muzzleloaders, in which the primer is seated in front a bolt face in the breech. For more classic designs, called sidelocks, ignition can be achieved by #10 percussion caps, musket caps, #209s, or even a flint stone struck against a frizzen. That last option is worthy of an article in and of itself.

While mostly relegated to shotguns in modern times, pump-action rifles were all the rage back in the day, and you may stumble across a classic Remington 760 Gamemaster at some point. Instead of a handle running the bolt back and cycling the action, the bolt is connected to a mobile fore-end by one or two action bars, along which the fore-end can be moved, or “pumped.” Doing so ejects a spent shell casing, chambers another one and cocks the gun.

Pump-actions have mostly fallen out of favor these days due to the strength needed for a locking mechanism to handle modern chamber pressures, as it would make the pump almost unworkable without massive effort. That said, there are still companies making them for older, classic deer chamberings like .30-30 Winchester. As with most every rifle-type on this list, there are a variety of ways the gun can be fed and made safe, but the action remains roughly the same across all pump guns.

One of the first actions designed to withstand modern smokeless powders, the rolling-block is an incredibly strong system. The breech is sealed by a block that rotates in place on a pin, and is locked in place by a hammer, hence the name. While a durable design, the rolling block is limited mostly to slow, single-shot applications, thumb-cocked by a hammer and is thus generally only found on vintage or reproduction guns.

Semi-automatic rifle types, plainly put, are rifles that do not need to be manually cocked for every shot. Firing a round initiates the ejection of its case, the chambering of a new round, and the cocking of its hammer. It will do this every time the trigger is pulled, until the gun runs out of ammunition. If you thought having two types of bolt-actions was excessive, you’d better hang on tight, as semi-automatics can be blowback operated, recoil operated, gas operated, or even piston driven.

Generally constrained to pistols, blowback operation utilizes the rearward force of the propellant from the cartridge to move the bolt back, ejecting the spent casing and chambering a new one. This is a relatively weak force, hence why it is generally limited to pistols, but it is sometimes used on small rimfire rifles.

Another type of operation no longer commonly found on rifles, recoil operation utilizes the force of the recoil to work the action. In a long-recoiling system, the barrel and breechblock stay locked together throughout the process, meaning the barrel retracts with every shot. A short-recoil system, on the other hand, only has the barrel move a tiny distance, with the breechblock traveling alone for the majority of the cycle. Nowadays, recoil operation is generally found on shotguns and pistols, the glaring exception being heavy machine guns like the M2-HB.

The most common way to cycle a semi-automatic firearm, gas systems channel the gas from a fired projectile out a small hole (generally in the barrel), and use the pressure it creates to cycle the bolt. The piston-driven design–best known in the AK-47 platform–is a cleaner-running variant of this, as it uses gas to press on a piston, which is attached to the bolt by a rod, to cycle the action. It is cleaner since gas is not routed to the bolt, from there escaping directly into the action, but requires more moving parts, and thus is slightly more complicated.

You’re probably wondering if your author has lost his mind, or understands the proper definition of a rifle. As it turns out, only one of the above is true. Revolvers were once in vogue both as pistols and rifles, particularly for cavalry troopers, though misfiring problems have relegated them to reside only in history books, and as careful reproductions. Nonetheless, you may one day stumble across a six-shooting long-gun, so its existence merits inclusion. That said, I’d certainly not recommend it for your next hunt. They have a nasty reputation for firing several shots simultaneously, right when you least expect it.