Learn to Shoot a Gun in These 3 Steps 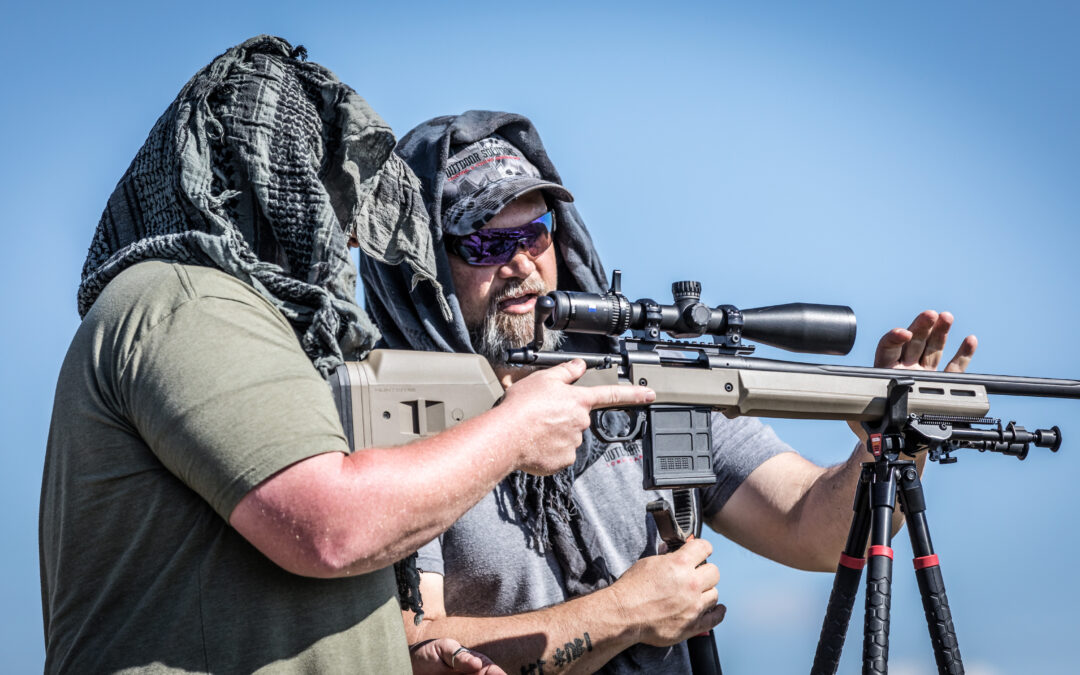 If you’re looking to go afield in pursuit of game, there’s no question that using a rifle is the most efficient way to do it. The learning curve is far smoother than that of a bow, or even a muzzleloader. There are still many things to master, however, and if you’re reading this you’re likely curious where you should get started. So read on for three simple steps that will help you learn to shoot in no time.

There are many sorts of guns out there, but for our purposes let’s focus on the most common hunting rifle in the woods–the bolt-action. Acquire a bolt-action, have a knowledgeable friend or mentor to ensure the gun is fully unloaded, then begin to familiarize yourself with the construction. There are several different types of magazines that the gun could use, from detachable box magazines; to hinged floorplates; to tubular magazines; and even rotaries. Whichever one your particular rifle uses, learn how the cartridges go in, how they can be unloaded safely, and how they are fed into the chamber. It is best to use snap caps of the proper chambering for this, so you can see and feel exactly how the process works without ever touching live rounds.

Next, check out the controls. Your bolt-action should have a safety either on the tang (the area behind the bolt); to the right of the tang; on the bolt itself; or down on the trigger guard. See what each position of the safety does (while there are some safeties that resemble simple on/off buttons, others do have three positions), and how to quickly engage and disengage it. Look down the sights with your dominant eye–does your gun have iron sights or a scope? If the former, practice aligning the front post in the middle of the rear notch. If the latter, practice quickly finding the crosshairs. Finally, rack the bolt and give the trigger a squeeze. Feel especially for where it breaks, as this is where your shot will release. Get a sense of how to run the bolt smoothly and gently pull the trigger, then it’s time to move on to the next step.

At this step, while you learn to shoot, you should be at a range. However, there should still be no live ammunition around. Nonetheless, make sure you know the NRA’s rules for firearms safety by heart before you arrive, and have ear and eye protection at the ready. Find a bench and a rest for your rifle (a front and rear bag will work fine). Put the rifle in the rest and sit down behind it. If the bench is L-shaped, don’t be tempted to sit too far to the side of your gun; instead, position the gun as closely in front of you as possible and tuck the buttstock into the pocket of your collarbone. (NOTE: this is not recommended for large-caliber magnums, as it will be uncomfortable to have it that tight to your collarbone; you shouldn’t be learning to shoot on such a gun anyway).

Get comfortable. If you are right-eye dominant, sit on the left side of the rifle. Your right eye should be looking down your sights, with your right hand on the trigger. If you’re left-eye dominant, you should be on the other side of the rifle, with your left hand on the trigger. Align your sights with the target, and make sure you’re using as little muscle to keep your head in position as possible.

Also ensure your rifle is sitting almost fully supported by the bags, rather than your arms. Your trigger hand should be on the grip of the rifle, thumb riding on the same side as the rest of your hand, rather than wrapped around. Your support arm should be curled under, hand on the rear bag. Now practice your shot.

Rack the bolt with whichever hand is on the bolt-handle side (generally this will be the trigger hand, but if you’re left-eye dominant shooting a standard right-handed rifle, it will be your support hand. While harder to come by, it would eventually be worth looking into a left-handed rifle if you’re left-eye dominant). Click the safety on. Take it off. Gently squeeze the trigger. Did the sights move off the target when the trigger broke? If so, your squeeze is too abrupt; try again. After you’re comfortable putting the gun on safety, switching it to fire and breaking a shot, grab your snap caps. Practice loading the rifle while keeping the muzzle safely downrange, then positioning for a shot, taking the safety off and firing through a “full” magazine. When your last snap cap is ejected, leave the bolt open so everyone knows the gun is empty, then either run the drill again (this is called “dry-firing”) or move onto the next step.

Eventually, of course, in order to learn to shoot a gun, you have to actually send some lead downrange. While this entire process would be better accomplished under the gaze of an experienced mentor, I must reiterate specifically for this section: if you can find someone to watch and give you pointers in real time, that is far and away the best option.

With the bolt open and the muzzle downrange, load your ammunition into your rifle, double-checking to make sure it’s the right cartridge for your firearm. Once loaded, close the bolt (ensuring the cartridge feeds properly into the chamber) and flick the safety on. Get behind the rifle exactly as you did when dry firing, and when your sights hover over the target, flick the safety off. Take several deep breaths. On an out-breath, squeeze the trigger until the shot is released.

Once the shot is away, flick the safety back on. Was the recoil too painful? If so, move the gun a little away from your collarbone and toward the shoulder. If not, keep it where it’s at. Also practice keeping both eyes open all the way through the shot while you learn to shoot (this will take some practice, as we naturally blink during recoil). Now take the safety back off, rack the bolt and try again. While you still have quite a ways to go to achieve true marksmanship, congratulations! You now know how to shoot a gun.