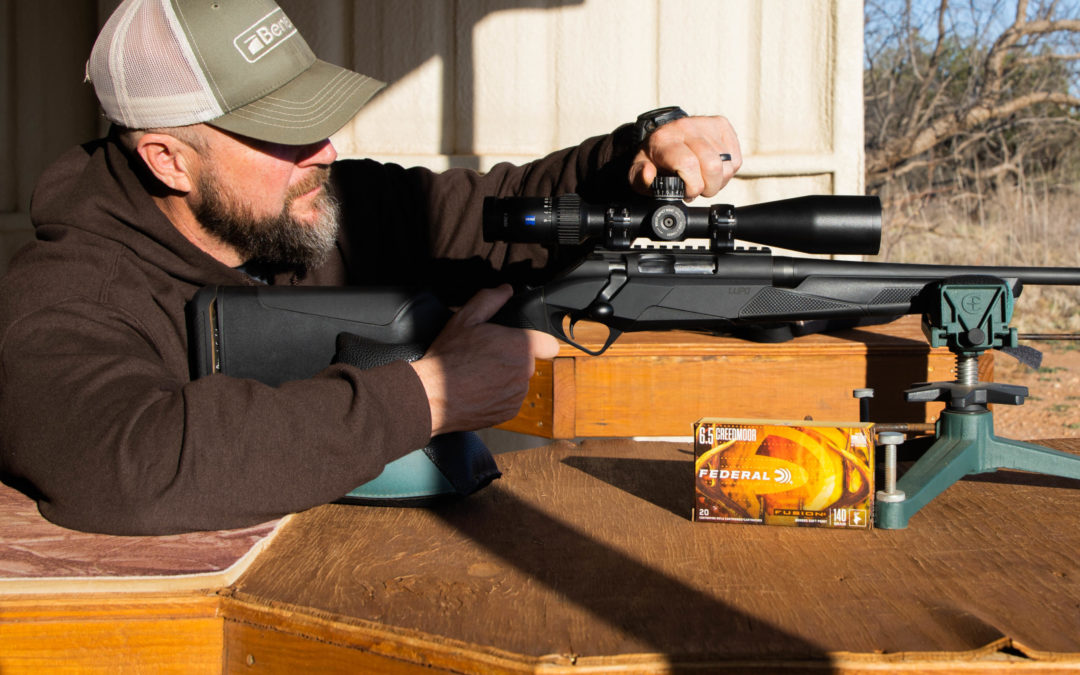 How does this Italian bolt-action stack up as a long-range hunting rifle?

During the two-plus days I spent at the class, a fair amount of my attention was focused on answering the question: How effective would the Lupo be for taking deer and other big-game animals out to 400 yards?

The bolt-action, magazine-fed Lupo, I concluded, was quite capable of making first-shot, one-shot kills to 400-plus yards on big game. It was very accurate, the bolt-action locked up solidly, and the five-round magazine tucked up into the receiver nicely and out of the way. The Lupo is also threaded for a suppressor, and Benelli’s Progressive Comfort System built into the stock effectively reduces recoil.

One caveat, though: Benelli placed the Lupo’s trigger system in the stock’s wrist at a strange angle. In some shooting positions, that angle required me to twist my hand and wrist in a way that made it difficult to shoot, especially when firing from a level platform like a shooting bench. Not that much hunting is done off a bench. Still, it will take a hunter some practice and adjustment to get used to that different trigger angle and trigger-guard placement.

Taking the Benelli Lupo to 1,000 Yards

The class was held near Coalville, Utah, this past June, and was attended by 15 people, including myself. Three instructors, all with impressive military and civilian shooting credentials, took us through two days of intensive shooting, starting with 3 MOA steel targets ranging out to 1,000 yards. https://8daa68bf4c1bf6391da2e109e3f52182.safeframe.googlesyndication.com/safeframe/1-0-38/html/container.html

Then, on the second day, we traveled up into the nearby mountains and shot from positions we might encounter while hunting, like off large rocks and tree stumps, from shooting sticks, and lying prone on rocky hill tops.

Obviously, the course was designed to make us better long-range shooters. But the purpose of that was for us to find out just how far we could ethically take a shot at a big game animal. Most of the participants I talked with hadn’t shot a game animal at much over 125 yards, and they wanted to gain the skill and knowledge to know how and when to take a shot at 300 yards or more.

Each shooter was provided with a Benelli Lupo chambered in 6.5 Creedmoor and topped with a Zeiss Conquest V4 6-24×50 rifle scope. We shot suppressed, the rifles tipped with AAC Jaeger 30s. Barnes Precision Match in 6.5 Creedmoor ammunition firing a 140-grain boat tail bullet rounded out or rigs.https://8daa68bf4c1bf6391da2e109e3f52182.safeframe.googlesyndication.com/safeframe/1-0-38/html/container.html

We zeroed our rifles on paper at 100 yards, then shot more paper at 200 yards, taking turns shooting and spotting with a partner. Then we stretched to 3 MOA steel targets at 300 yards, and more steel at every 100-yard interval out to 1,000 yards.

Our day-two shooting was really a much better test of the Lupo as a longer-range hunter and the rifle did really well. My first shot hits included:

A longer-range hunter? With that kind of accuracy, the answer should be, “Hell, yes!” And yet…

Those dead-on shots from positions much less stable than day one’s shooting table got me asking myself: How come I’m drilling damn near everything when shooting off logs and brush, first shot in all but one case, yet I had so much trouble the day before hitting a bullseye at a measly 100 yards?

Which is when I began paying attention to my trigger hand’s placement on these day-two shots and realized all my shooting was being done uphill or downhill. And with the rifle tilted at these angles, my hand and wrist were fairly comfortable.

I also remembered that during day one my accuracy improved as the shooting stretched out to 500 to 1,000 yards. At the time, I assumed I was getting used to the rifle as the day wore on and so my accuracy improved. But it occurred to me that maybe the improved shooting was because those targets were placed up slope from my shooting table and I had to place the Lupo at a definite angle to make those shots.https://8daa68bf4c1bf6391da2e109e3f52182.safeframe.googlesyndication.com/safeframe/1-0-38/html/container.html

The 100- and 200-yard targets I had so much trouble with were essentially straight ahead and level with me and the shooting bench. At that position, my hand was forced back and this twisted my wrist at an awkward angle relative to my forearm and shoulder; getting stable with my hand and wrist in this position was very hard.

The Lupo’s trigger system looks a lot like that found on Benelli’s Super Vinci, but the Lupo’s is pushed up and back into the stock’s wrist or grip at an even more extreme angle.

The trigger itself snapped off a very crisp 2 pounds 4 ounces according to my Lyman Digital Trigger Pull Gauge. The bolt worked easily and smoothly, even with the dust and dirt blown into the action during two windy days in a very dry Utah landscape. Recoil in this caliber was minimal.

But the design of the trigger placement, in my shooter’s opinion, is off. I hope Benelli can adjust that in future models, maybe a Lupo II?  That’s a rifle I’d gladly take on a hunt where I could expect a shot on a deer or elk of 400-plus yards.