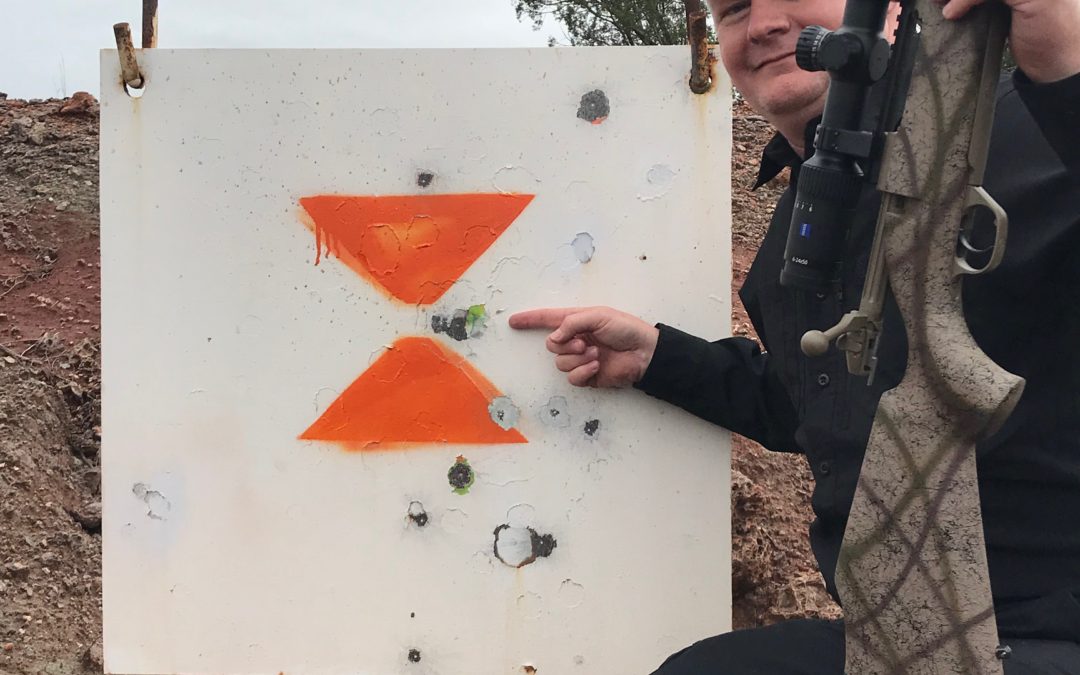 As rifle season looms around the corner, hunters filter to their local ranges or fields to zero rifles and put in some trigger time. For those hunting timber stands, sub 100-yards shots are the norm and are easily achieved after minimal practice, but hunters who stalk the open plains and back country hills may find themselves stretched to their limits when a long shot presents itself. With many hunters rarely ringing steel past 200 yards, expert instruction from a long-range shooting school will give them the knowledge, tools and confidence to not only reach out to longer distances, but also improve their accuracy on shorter shots.

Recently, Scott Vaughn participated in Outdoor Solutions’ long-range shooting school in Texas and followed it with a successful mule deer hunt in Utah. Originally from Florida, Vaughn works and resides in Nicaragua. Vaughn learned the basics of shooting and safety at an early age and routinely competes on a 25-meter pistol shooting team with an occasional stint in rifle competitions. When Vaughn found the opportunity to sharpen his shooting skills for target shooting and hunting, he jumped at the chance.

“It just appealed to me the thought of learning how to shoot out to 1,000 yards,” said Vaughn. “It’s unique. Not a lot of people can say they hit targets at that distance. It was more of a personal deal.”

During the two-day school, Vaughn learned of all the variables involved in longer shots and how best to interpret and compensate for these variables during shooting out to long distances.

“The instructors are all expert trainers and presented the information is a way I could easily understand,” said Vaughn. “After the first half of day one, I was hitting the target at 1,000 yards.”

The Right Tools for the Job

Through its partnerships with Weatherby and ZEISS optics, Outdoor Solutions put together a rifle/optic combo best suited for the shooting class and the upcoming mule deer hunt. Vaughn shot a Weatherby Mark V Terramark RC, chambered in 6.5 Creedmoor and topped with a ZEISS Conquest V4 6-24×50 riflescope, both rather affordable options for long-range shooting. 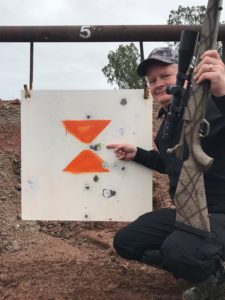 “As far as an off-the-shelf gun, it was high end but not custom made,” said Vaughn. “The combo with Zeiss worked well. Once you go to the school, you figure out that you don’t need a $4,000 scope to hit 1,000 yards. The setup worked perfectly and the caliber was great because it doesn’t kick much but still takes game.”

Vaughn came out of the long-range shooting school with a newfound confidence in his abilities as a shooter and in his equipment.

“It’s not that you will be shooting deer at 750 yards all the time, but when you have a 350-yard shot, you feel comfortable taking it,” said Vaughn. “Before the school, 300 yards was a long shot for me.”

Applying Long-Distance Skills in the Field

With limited time in the U.S., Vaughn relied on Outdoor Solutions extensive experience in helping find the right outfitter for the hunter to test his new shooting skills. Previous Outdoor Solutions’ clients experienced great success at an outfitter based in Utah and the staff made their recommendation to Vaughn.

“I didn’t have time to go and stake out a hunting area,” said Vaughn. “I could go to Florida and hunt for free, but it would take three weeks and I still would have to get lucky. Knowing this place had a high success rate helped me make the decision to go as well.”

At the conclusion of the long range shooting school, Vaughn boarded a plane for Salt Lake City where the outfitter picked him up and drove the one-hour trip to the lodge.

“There were 18 total at the lodge during this hunt,” said Vaughn. “We had a dinner together where they paired us up with our individual guides and started out early the next morning. As amazing as it sounds, there were 18 people and the only time we saw each other was at the lodge because we all were hunting such huge amounts of property. I never saw another hunter while in the field.”

After an early morning start, Vaughn and his guide rode in a side-by-side on the lookout for muleys. The duo dismounted and took to foot to climb for a better vantage point.

“We found a few that the guide liked in the morning across the mountain, but they got lost in the woods,” said Vaughn. “We headed back to have lunch and returned to the spot and found a good buck. We backed away and wrapped around and went where we thought we would see them. We saw the buck from earlier and a better buck was there too at 165 yards.”

Vaughn steadied his rifle and pulled the trigger, dropping the buck where it stood. Although the shot was relatively short for a Western hunt, Vaughn cites the training he received as key to making the precise shot under pressure. 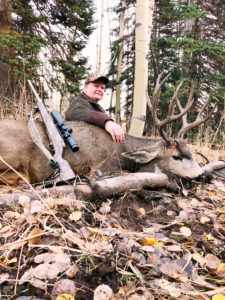 “I kind of lucked into a short shot, but if the deer had been on the other side of the mountain, he would have been at 550 yards,” said Vaughn. “I still would have felt comfortable taking the shot. Of course, if you get a short shot, you take it. The training just gives you a lot of confidence.”

Vaughn returned home to Nicaragua with a fresh skill set, newfound confidence in his shooting and the memories of a fruitful hunt. The hunter has a bit of advice for those who believe their shooting skills are enough to get by.

Vaughn chose to rely on Outdoor Solutions’ experience and relationships with the most successful outfitters in the U.S. to book his hunt. This not only saved him valuable time, but also gave him confidence knowing he would be hunting with the best.

“I think it’s important because of the trust factor,” said Vaughn. “If I got on the Internet and looked up where to hunt out West and tried to do it on my own, it’s luck of the draw. It just gives me confidence that if Outdoor Solutions set it up, it would be a good hunt with a good guide. I had a great time and took a good mule deer. Without their help and guidance, who knows what would have happened.”

Shooting Positions and the Shooting Budget

Shooting Positions and the Shooting “Budget” By Ryan Long So you’ve dreamed of attending a long range shooting school with the aspirations of hitting the magic 1000-yard mark….with repeatable results. You conducted your research, vetted the instructors, saved your...

END_OF_DOCUMENT_TOKEN_TO_BE_REPLACED

We Do It All For You

We Do It All For YouSounds kind of cheesy, but it's true. When it comes to adding new outfitters to the Outdoor Solutions line up, we do it for you, the client, to ensure that you are getting the experience you are expecting. We admit our inspection trips and checking...

END_OF_DOCUMENT_TOKEN_TO_BE_REPLACED 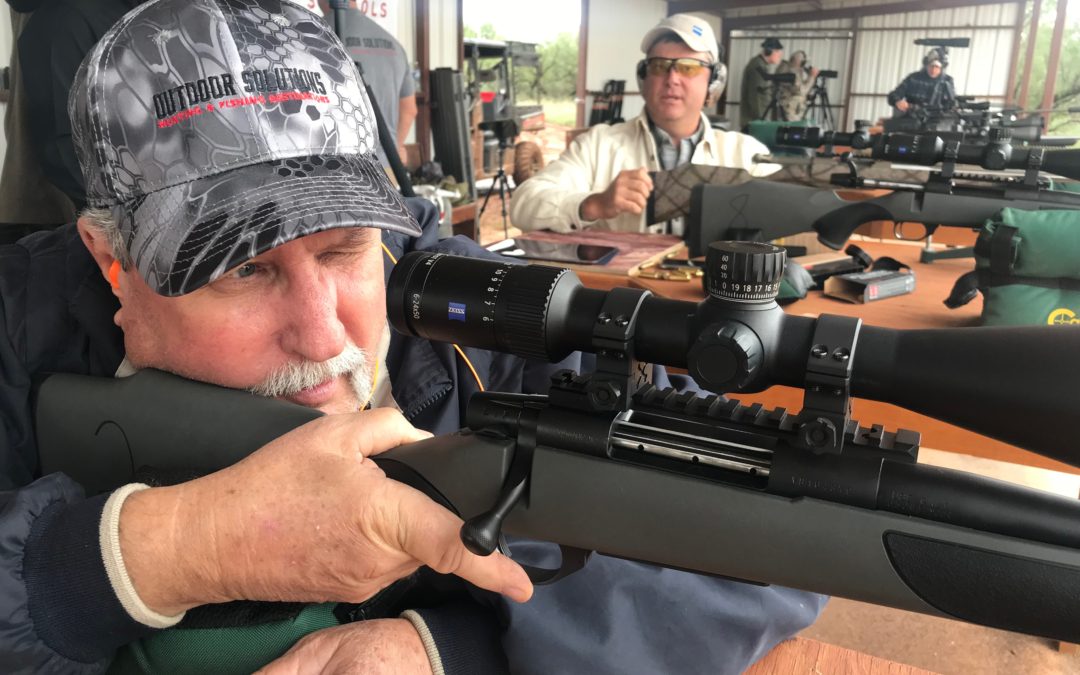 During long-range shooting, many external variables can affect a bullet’s flight path from barrel to target. Understanding these outside forces and compensating for them will greatly increase accuracy, even at extended ranges. Outdoor Solutions long range shooting schools looks at some of these variables and how each will affect shots at short or long distances.

Gravity has a profound effect on a bullet’s path. As soon as a bullet leaves the barrel, gravity pulls it toward the Earth. Gravity, combined with drag slowing the bullet, will cause the bullet to travel in a parabolic trajectory with the amount of flight time determining the rate of drop. Bullets that spend less time in the air are affected less by gravity. While this can sound complicated, gravity is constant and predictable so it is one of the easiest variables to account for when shooting, even while toggling between different distances.

The extent of the effect wind will have on a bullet will be determined by wind speed, wind direction and the ballistic coefficient of the bullet. Wind can be broken down into essentially four different types. A headwind blows from the target to the shooter with a tailwind blowing the opposite way. Crosswinds come from either the left or right and at many times will blow at an angle (oblique or quartering wind). Vertical wind will also need to be accounted for, especially when hunting in the mountains or hills.

When a bullet exits the barrel, it is immediately met with air resistance called drag. This will continually slow the bullet throughout its flight. Drag’s effect on a bullet is measured as its ballistic coefficient (BC) – a projectile’s ability to resist drag. In layman’s terms, the higher the BC, the more efficient the bullet flies through the air. And, bullets with a higher BC will fly further and with less wind drift, giving some forgiveness on estimating wind on long shots.

Although atmospheric conditions do not affect a bullet’s path as much as gravity and wind, these mitigating factors still need to be accounted for when shooting long distances. Air pressure, air temperature and, to a lesser extent, humidity will all affect a bullet’s airborne path. Whether due to elevation or weather patterns, increased air pressure results in denser air. If the air pressure rises, so does the air density. Dense air will slow a bullet more than thin air. This extends the flight time, which exaggerates the effects of variables.

Air temperature and air density have an inverse relationship. When the air temperature goes up, air density decreases. While lower air pressures will generally accompany elevation gains, air temperatures typically lower the higher you go in elevation. At times, these two factors will cancel each other. Air temperature also affects powder burn rates. Cool and warm powders will produce differing muzzle velocities, which will in turn change the point of impact downrange.

Bullets will fly more easily through humid air because it is less dense. These three conditions can be put together to produce a density altitude – a figure to input into a ballistics calculator.

All the above variables can be identified, measured and accounted for during a shot. If small groups still elude you, the problem is most likely shooter error. Many of these shooting “mistakes” are subtle and difficult for a shooter to recognize without the help of an instructor. An improperly-mounted optic, rifle cant, inconsistent trigger pull, inconsistent barrel resting, uneven shoulder press and inappropriate ammo are common mistakes that can easily throw shots wide of the target.

One way to mitigate these mistakes is to seek training from expert trainers. Outdoor Solutions’ long range shooting schools teach proper shooting techniques and how to identify and compensate for external variables. After a two-day class with Outdoor Solutions, shooters and hunters will fully understand these variables and leave with greatly improved skills, techniques and the confidence to put shots on target.

Shooting Positions and the Shooting Budget

Shooting Positions and the Shooting “Budget” By Ryan Long So you’ve dreamed of attending a long range shooting school with the aspirations of hitting the magic 1000-yard mark….with repeatable results. You conducted your research, vetted the instructors, saved your...

END_OF_DOCUMENT_TOKEN_TO_BE_REPLACED

We Do It All For You

We Do It All For YouSounds kind of cheesy, but it's true. When it comes to adding new outfitters to the Outdoor Solutions line up, we do it for you, the client, to ensure that you are getting the experience you are expecting. We admit our inspection trips and checking...